1- What does it mean if a meter is “networked” or smart?

Meters are “networked” or smart when they emit radiofrequencies. In other words, the meter is equipped with a radio emitter that sends out pulses, like a radio station that sends music out over radio waves in the air that you can hear in the car.

The meter’s radio emits a pulse approximately every 20 to 60 seconds. This brief but powerful pulse transmits your electricity consumption data to Hydro-Québec.

2- Where can I find out the features of networked or smart meters?

3- What frequencies do networked or smart meters use?

The Itron C1SR meter uses 909.5861 MHz. The Landis+Gyr FOCUS AXR-SD communicates with the Hydro-Québec routers on 902.1 MHz. At some point in the future, they will also communicate with certain household appliances in our homes on a frequency of 2.405 GHz.

4- There seem to be some discrepancies between the figures provided by Hydro-Québec and those provided by groups opposed to the new meters. Who is telling the truth?

Let’s just say that Hydro-Québec is presenting the features of its new meters in the best possible light. You can see how the figures were obtained by referring to the next two questions in this FAQ:

5- The authorities tell us that meters only emit 55 μW/m2. Why should I install a Smart Meter SafeGuard?

It is true that the average measurement of the radiofrequency power density emitted by certain “smart” meters (Landis+Gyr) is 55μW/m2 in a 6-minute period.
That is the AVERAGE value…

We say certain smart meters because the calculation of the average includes the height of the peak, the length of the pulse and the time between each pulse.

When we measured the power density of the radiofrequencies of several smart meters with a known, calibrated instrument, we found that they all emit a pulse every 20 to 60 seconds. The power density of the pulses varies in different meters. Each pulse emits between 8000 μW/m2 and 40000 μW/m2 at peak levels.
Since it is somewhat complicated to calculate the average of a pulse wave, we use a device that generates a graph. After all, a picture paints a thousand words.

Note that the average level is far lower than the peak. Do our body cells do an average over 6 minutes before reacting to the power density invading them or, on the contrary, do they receive each pulse for what it is?

Ideally, we would not expose our bodies to these pulses at all, but if you have a networked meter (smart meter), you can reduce your exposure with a product (the Smart Meter SafeGuard) that attenuates the power density.

6- Why install a Smart Meter SafeGuard if the meters are only in operation 83 seconds a day?

Because these 83 seconds represent 1720 radiofrequency pulses per day! *

We measured the power density of various meters with a known and calibrated measurement instrument. Reports by two independent firms corroborate our measurements.*
It is true that some smart meters emit pulses for a total of 83 seconds a day. According to our measurements, for example, the Landis+Gyr meters emit a short pulse every 20 to 60 seconds. The pulse ranges in duration from 46 to 63 milliseconds (0.046 to 0.063 seconds). On a human scale, this is infinitely short, but for a microchip, it is quite ordinary. In fact, microchips can work with pulses far shorter than that.
To make our calculations easier, we will assume a pulse every 60 seconds, or once a minute. There are 24 x 60 minutes in a day, for a total of 1440 minutes a day. At once a minute, that gives us about 1440 pulses a day.
Now multiply the length of the pulse, for example, 0.058 seconds, by the number of pulses a day – 1440 – and you get the 83 seconds announced by Hydro-Québec.
The body works partly by chemical reactions and partly by electrical impulses. These electrical impulses may be far shorter than those emitted by smart meters and yet still have an effect on our cells. Is it possible that the pulses emitted by smart meters can have an effect on the way the body functions? 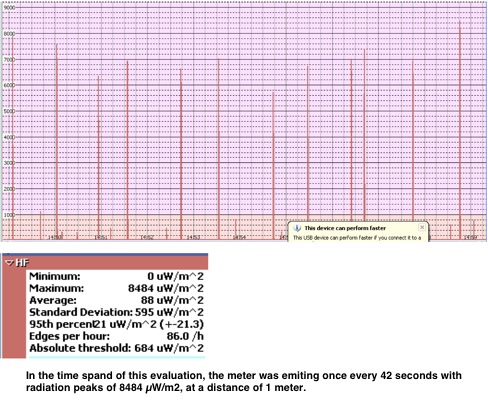